Amidst the pressing COVID-19 pandemic, we witness society trapped in a depressive state – whether bound by realised job losses, a heightened fear of death, or the confines of our own homes. However, the human economy thrust into a state of panic can be sharply contrasted against the ambivalence of the natural world.

In fact, many see climate change emerging a winner during this difficult ordeal. After all, with largely subdued economic activity, the same busy industrial factories, aviation travel, and daily commutes to work have halted – all massive sources of pollution. In turn, people have reported clearer skies, tranquil water bodies and the flourishing of flora and fauna globally.

These anecdotal assertions are plainly evident in the hard data. One of the largest industry manufacturers and greenhouse gas emitters in China has already seen their CO2 output cut by around 25% (ie. ~250 million metric tons). Meanwhile, depressed economic demands in the EU have forecasted an emissions reduction close to 400 million metric tons for 2020.

The stark illustration below depicts NASA-captured images of the NO2 (another major greenhouse gas pollutant) concentration in China before and after the nation-wide enforced lockdown due to COVID-19.

Overall, experts predict global emissions to fall around 5% this year due to the economic repercussions following the virus impacts. Looking at things glass half-full, it appears that COVID-19 has mitigated the deadly impact on another invisible killer in climate change, as research from Stanford has estimated around 77,000 lives to be saved via better air quality.

Yet, the climate change story isn’t so clear cut, and is in fact polluted into obscure shades of grey. For one, and in a very paradoxical sense, it is likely that global temperatures will actually rise in the short term due to the shutdown of industry.

While these pollutive industries have been observed to scale down their greenhouse footprint ever since the pandemic outbreak, it is those same industries that release what are known as “aerosols” into the atmosphere. Here, aerosols classify as anything small and suspended in the air, which may include particles derived from industrial processes and car engines such as burnt biomass or black carbon.

Why is this important? While CO2 emits a warming effect to the planet, aerosols produce the opposite effect. Pardoning scientific jargon, this is due to the aerosol’s property in reflecting short wavelengths of radiation such as sunlight back into space instead of reaching the earth’s surface – thus exerting a cooling influence on the climate. Simply put, while the climate looks to be cooled by less CO2 in the atmosphere, it also looks to be warmed by the loss of its reflective barriers when less aerosols are being produced and emitted. In the short term, scientific data has shown the aerosol effect to override the greenhouse effect – thus making it possible for global temperatures to tick just above expectations for this calendar year.

However, empirical evidence shows this global-heating mechanism to be transient, as overall the heating effect from the lack of aerosols diminishes such that less CO2 emissions from this COVID-19 episode should theoretically translate into a net cooling effect in the long run. Unfortunately, the future seems positioned to disagree with this hopeful optimism.

While global economies have indeed seen emissions reduced, it is perhaps naïve to assume this current loss of emissions will subtract from the total of net emissions in the future. After all, economies do not operate statically, but are living adaptable organisms. We’ll use China as an example to illustrate this point:

Like many other major economic issues, China finds itself yet again a focal player in the climate debate during COVID-19. In order to support its massive population, internal economic industry and international trade exports, this has seen Chinese emissions making up a sizable portion of global emissions.

It is perhaps worthwhile to look back to pollution trends during the last economic crisis in the GFC for a best guess of what might occur this time. A glance a decade back saw CCP (Chinese Communist Party) policies of a $586 billion package mostly allocated towards infrastructure building to promote back jobs and industry. Of course, with infrastructure building boosting production of concrete (of which has a large carbon footprint), we saw a heightened boost towards carbon emissions in China post-GFC. The below chart illustrates this point, as a temporary dip in CO2 emissions back in 2008-2009 was followed by a large acceleration causing a net negative towards climate change post economic recovery: 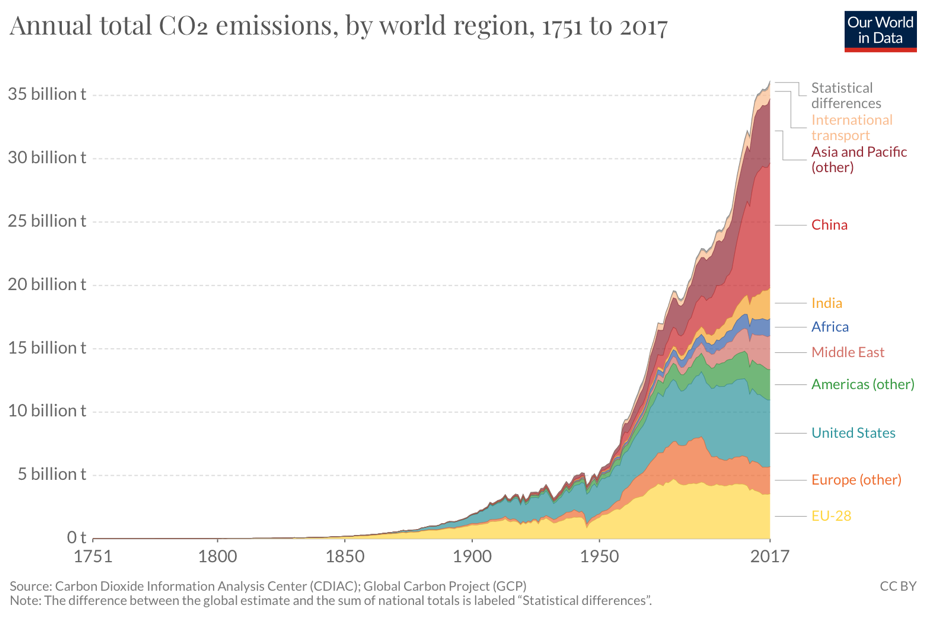 With historical precedence as a guide, we can reasonably predict the CCP declaring large stimulus packages to mend the damages caused towards its growth and employment. These policies could likely manifest in the form of cheaper credits to heavy industry, leading to a somber repetition of history.

While it is important to ensure emissions reduction, the other side of the climate change equation lies within the efficiency of the renewable energies transition. As a direct result of COVID-19, suspensions on industry has led installations of renewable energy to a stop. Despite China being a huge global greenhouse emitter as previously mentioned, it is also responsible for much of the planet’s renewable energy manufacturing (eg. Largest PV solar producer – see ‘The Solar Response to Climate Change’). Due to this, the renewable energy transition has seen its rate slow for 2020.

To compound on this issue, many governments in the hopes of reviving their economies from the brink of disaster have freed restrictions on outstanding environmental protection policies such as emission caps in the hopes of helping struggling businesses. In all, this comes as a moral dilemma, choosing a tradeoff between the health of the economy against the health of the natural world. Finally, COVID-19 and its consequences on the outlier year represent a loss to the collection of climate data that is deemed useless by the scientific cohort – stalling a better understanding and response towards the renewable energy regime.

While it is painful to face this uncomfortable reality that even our precious planet looks to suffer through this crisis along with us, this is merely a forecast, not an end all be all. As shown time after time, predictions are often proven wrong, and we should be optimistically hopeful that the world finds a way to avoid those mentioned in this article. Perhaps a societal adoption of the “work from home” model will see emissions curtailed by way of reduced commuting. Perhaps new scientific advancement will see renewable transition accelerate faster than expected (renewables are already cheaper than a great bulk of coal fleet). Perhaps society will be able to put as much attention and cohesive collaboration towards resolving the climate change crisis as it is doing now towards the COVID-19 crisis. While many of these potential futures seem a longshot, the world always seems to find ways of surprising us. M&A activity has been strong in 2021. However, whilst there has been a deals boom, there has also been a rejections boom. In this piece, Samuel Subramaniam explores the impact of optimism in M&A markets and how views of the longevity of the pandemic have impacted valuations. IPO activity is further discussed, citing some strugglers in May and their resultant impact on market sentiment.